Lead can be harmful to people of all ages, but the risk is highest for unborn babies, infants and young children (under five years of age).

Health effects as a result of lead exposure differ greatly between individuals. Things such as a person’s age, the amount of lead the person is exposed to, whether the exposure is over a short-term or a longer period, and the presence of other health conditions, will influence the individual symptoms or health effects. For example, an adult exposed to lead in the workplace over several years may show different symptoms and health effects than a child exposed over a short period, even if both have the same blood lead level detected on a blood test.

The National Health & Medical Research Council (NHMRC) has reviewed the findings of a comprehensive independent evaluation of the evidence on the health effects of lead.

The evidence found an association between blood lead levels less than 10 micrograms per decilitre and health effects, including reduced Intelligence Quotient (IQ) and academic achievement in children, behavioural problems in children, increased blood pressure in adults and a delay in sexual maturation in adolescent boys and girls. However, there is insufficient evidence to conclude that lead at this level caused any of the health effects observed. 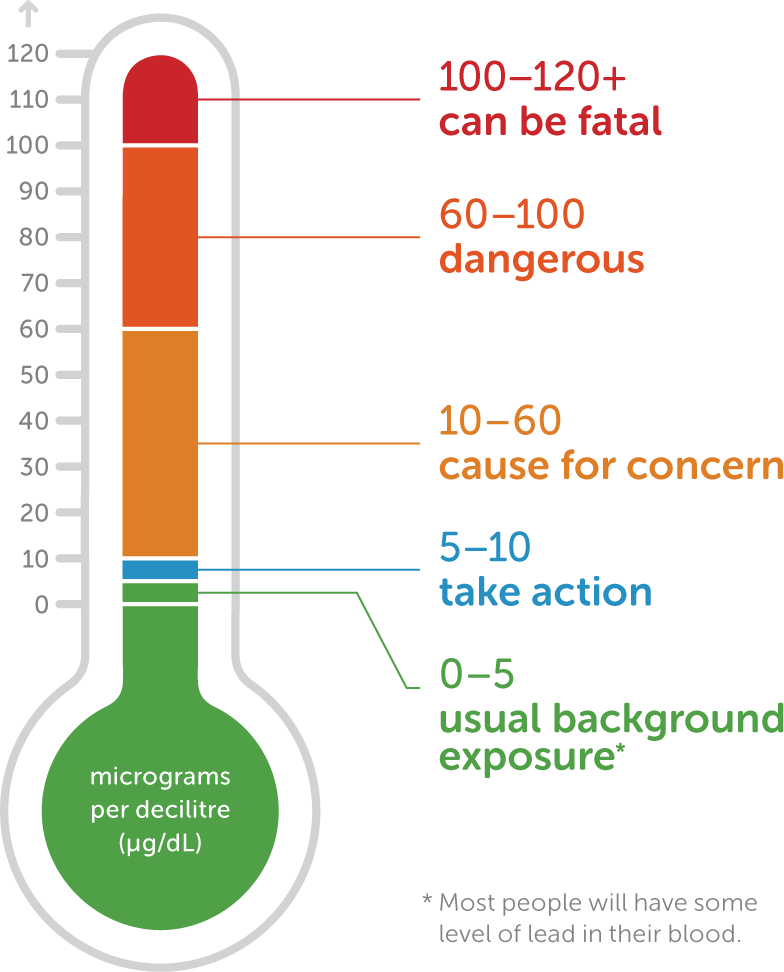 On 19 May 2015, the NHMRC Statement: Evidence on the Effects of Lead on Human Health was released to provide advice to the community and to policy makers on this issue.

It is well established that blood lead levels greater than 10 micrograms per decilitre can have harmful effects on many organs and bodily functions. Effects such as increased blood pressure, abnormally low haemoglobin (the protein that carries oxygen around the body), abnormal kidney function, long-term kidney damage and abnormal brain function have been observed at blood lead levels between 10 micrograms and 60 micrograms per decilitre in adults and children.

For blood lead levels between 5 micrograms and 10 micrograms per decilitre, an association was observed between higher occurrence of behavioural problems (poor attention, impulsivity and hyperactivity) in children, increased blood pressure in adults (including pregnant women) and a delay in sexual maturation or puberty onset in adolescent girls and boys.

The contribution of lead to the above health effects is difficult to determine. The effects of blood lead levels less than 10 micrograms per decilitre on IQ, academic achievement and behavioural problems is likely to be small, with stronger influences by other factors such as socioeconomic status, education, parenting style, diet, or exposure to other substances.

Information for pregnant women and families

Hygiene and cleaning in and around the home

Protecting your kids from lead in the backyard

Protecting your family from workplace lead